Underwater robots have been an important tool for marine science, exploration, and work for the past thirty or forty years. We’ve become familiar with terms like ROV and AUV to describe types of subsea vehicles and these terms have been stable for years. However, there’s a new term cropping up in the last few years: “underwater drone”. Where did this term come from? What exactly is an underwater drone? Is it a new name for old technology or is it truly something new? We’re going to dive in and take a look.

Popularity and origin of “Underwater Drone”

Search popularity of “ROV” versus “underwater drone”, showing the first appearances and growing popularity of the drone term. (Data reflects searches in the United States only.)

The term was almost non-existent until some time in 2015, when it started to show consistent popularity. Looking at news articles from 2015 containing the term “underwater drone”, we can see what caused that. In September that year, OpenROV launched a Kickstarter campaign for their Trident Underwater Drone, one of the first commercial uses of the term, and along with it came a slew of articles on popular technology news sites. There was also a BBC article about the Fathom Underwater Drone, which ended up on Kickstarter in 2016, as well as a few articles about US Navy technology.

In late 2016, a US Navy autonomous glider was captured by a Chinese warship. News outlets around the world covered the story, calling the glider an “underwater drone” and driving search interest to an all-time high. Since then, interest has continued trickling upwards, and as of the writing of this article, the term “underwater drone” is about one quarter as popular as “ROV”.

Of course, you’re probably thinking that “underwater drone” is just an extension of the broader “drone” term, which is certainly true. “Drone”, which refers to unmanned aerial vehicles used for military, commercial, and recreational purposes, rose to popularity starting in 2010 when consumer level unmanned aircraft started to take off. Below is a comparison of the search popularity of “drone” compared to “ROV”, starting in 2004.

For the first six years from 2004-2010, the two terms are roughly equivalent but the popularity of drones eventually booms with peaks that are one hundred times more popular than “ROV”. Those peaks occur in each December, presumably because drones became a popular holiday gift. Note also that the popularity of “drone” has been decreasing for a few years, indicating that the drone industry is somewhere on the backside of the hype cycle.

This shows correlation between the rise of each term, with a lag between them, suggesting that “underwater drone” only became popular because of the broader “drone” term’s popularity.

So what is an Underwater Drone?

The term “underwater drone” might just be a passing trend, but it has survived a few years and it appears to still be on the rise, so let’s take a deeper look at what it actually means. Since there’s no dictionary definition or even a Wikipedia definition for underwater drone at this moment, we’ll investigate what appears in the search results, assuming that those are representative of the meaning of the term.

I took a look at the first fifty search results for the term “underwater drone” on Google (as of November 2, 2019) and there are a few interesting things to notice. Most of the results are either some sort of “Top 10 Underwater Drones” article or a company or affiliate store page for a specific vehicle. Those account for 31 out of the first 50 results. The rest are a mixture of informational articles and news articles about underwater drones.

From those 31 results I took a look at the price of the first vehicle listed for sale on the page. The average price of products sold as “underwater drones” was $1,503 and the median price was $999. The most expensive product that appeared was the Blueye Robotics Pioneer, at $9,878, followed by the crowdfunded Titan vehicle for $2,799. The most commonly appearing vehicle was the PowerVision PowerRay, closely ahead of products from Chasing Innovation, Sofar Ocean Technologies, and QYSEA.

The vehicles that appeared are very small ROVs ranging from 3-10 kg in weight and intended to be highly portable. These products are marketed as consumer products with flashy product pages, consumer packaging, and through marketplaces like Amazon. Also interesting to note is that eight out of the ten products shown above are from Chinese companies, showing a clear level of interest from that part of the world.

All of the search results were for some type of ROV, with almost no AUVs or USVs mentioned at all. The results were from relatively new companies, with few results for products that have been around for more than 2-3 years. Also important to note, the term “underwater drone” doesn’t appear in connection with any student ROV or AUV competitions like the MATE ROV competition or the RoboSub competition.

From this data, we can form an idea of what the term “underwater drone” means right now:

An underwater drone is a type of remotely operated underwater vehicle that is small, portable, and consumer-oriented, typically selling for around $500-$3,000 (USD).

Are Underwater Drones and ROVs the same thing?

I think this is a matter of opinion, but from the data presented above, I think it’s clear that underwater drones are a subset of ROVs and the two terms are not synonyms. Underwater drones represent a new segment of the ROV industry that is targeted towards an audience of customers who expect low-cost, consumer-oriented, easy-to-use products. 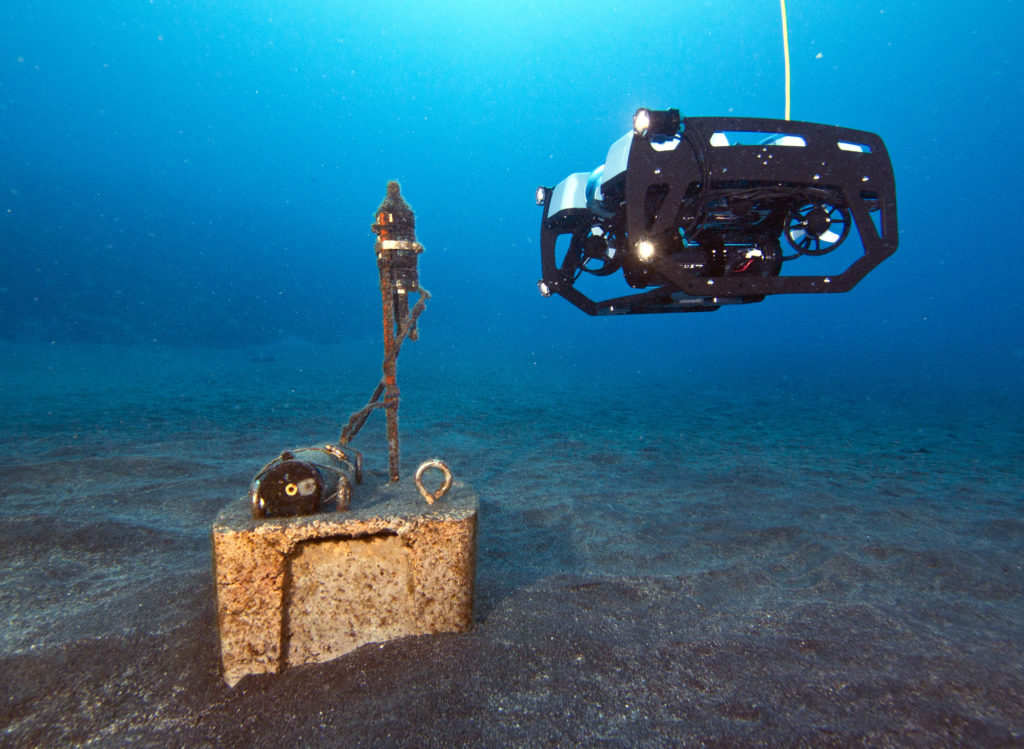 We’ve spent a lot of time thinking about and debating this at Blue Robotics. Our BlueROV2 is near the threshold where it would fall into the “underwater drone” category, but we feel that it is better classified as an ROV. It has more similarities with traditional ROVs than with the underwater drones we see above. We’ll continue to market it as an ROV, unless the definition of underwater drones changes enough to suit it better!

The future of Underwater Drones

Regardless of what you think of the term, “underwater drone”, I think it’s here to stay. We’ll see more companies enter this market with new and interesting products. A lot will change as it evolves!

There are a number of companies that have bet their futures on underwater drones becoming the next big thing, setting their sights on becoming the DJI of the seas (DJI is the largest producer of consumer aerial drones, currently valued at over $10B). Will that ever happen? Will underwater drones become popular like aerial drones? To me, it seems doubtful.

There are some pivotal challenges to making underwater drones as popular as their aerial cousins. There are obvious factors, like the small fraction of customers who live near water with clear visibility and interesting seascapes, or the need for a boat to access most areas, but I think the most fundamental challenge is the difference in what each type of drone enables. Aerial drones give you a different, and usually striking, perspective on a world that you can already see with your own two eyes. It’s easy for people to imagine the epic shots they’re going to get from an aerial drone, even if it’s just flying in their own backyard. Underwater vehicles, on the other hand, give you a chance to see things that are nearly impossible to see otherwise. While that excites those who have an explorer’s curiosity, it’s harder to ignite that interest in the general public. Underwater vehicles will continue to be most popular with those who need them for research or work, rather than recreation. 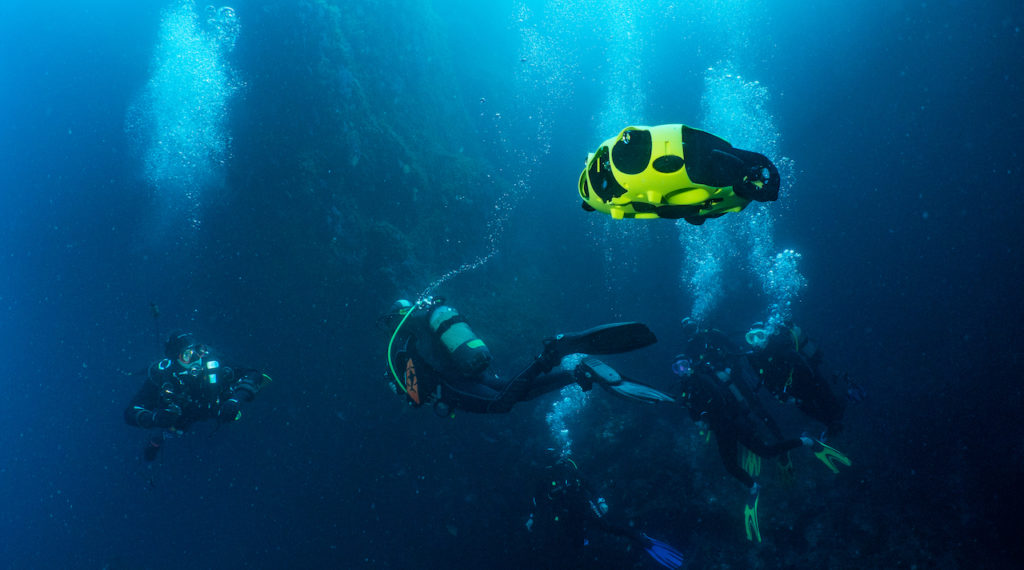 Whether the term “underwater drone” and the products associated with it become wildly popular or not, their availability and low cost will have impacts on the marine technology industry. Those stumbling across underwater drones today will be the ROV pilots, engineers, and marine robotics industry leaders of the future. It’s an exciting time in the history of marine robotics and ROVs and I think we’ll continue to see a lot of change!

Join the discussion on our forums and share your thoughts on this article! What do you think of underwater drones and their future?