We hope that you are having a wonderful holiday season! We wanted to give you a status update on the project and let you know what’s coming in 2015!

We have made significant progress on orders of T100 Thrusters. We sent out a big shipment last week as well as two weeks before. To date, we’ve shipped 285 thrusters and fulfilled orders for 106 Kickstarter backers! Despite that, we’ve fallen a little behind our original schedule. We’re planning to pick up the pace in 2015, especially as we launch the BlueESC and T200.

Just so you know, when your order is shipped, we’ll send you a message via Kickstarter. 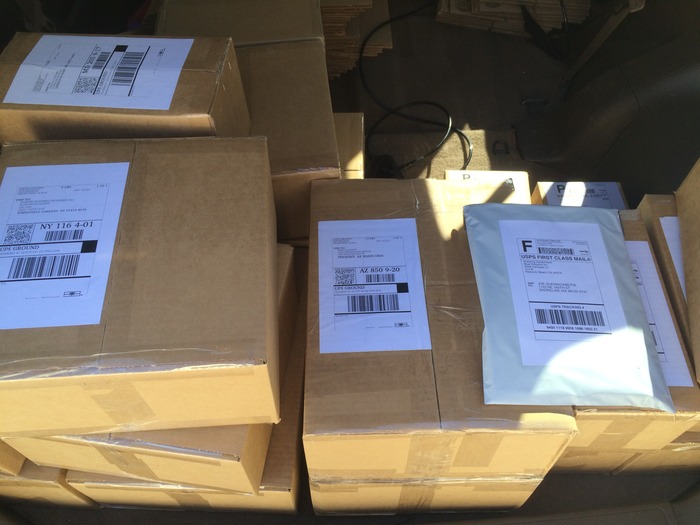 The OpenROV Compatible Kits will be shipping in mid-January. We we’re hoping to get them out the door in December, but we chose to spend a little more time optimizing the propeller design for the vertical thruster. The propeller is custom designed and 3d printed for the M100 Motor and the OpenROV kit.

The optimized propellers should be in our hands by mid-January and ready to be shipped! We apologize for not having these ready sooner but we think you’ll be happy with the result. 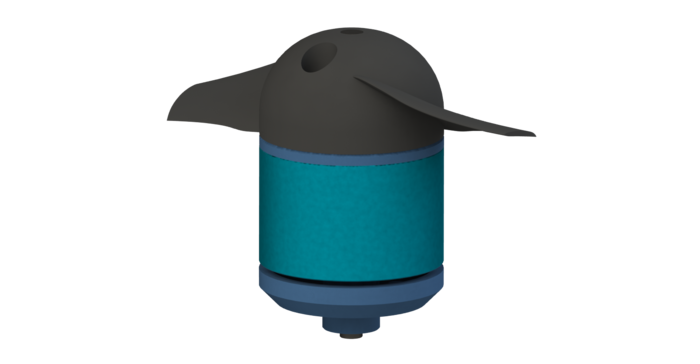 Computer rendering of the M100 with 3d printed propeller for the OpenROV vertical thruster.

First of all, we want to remind you all about our support forums at forums.bluerobotics.com. It’s the best place to ask questions about your thrusters or post updates on your projects. We try to monitor the forums and get back to your questions within a few hours.

We also have a new documentation section of our website at docs.bluerobotics.com. This is the place to go if you are looking for product manuals, instructions, and tutorials. It’s still a work-in-progress but it has most of the basic info needed to get your thrusters up and running. 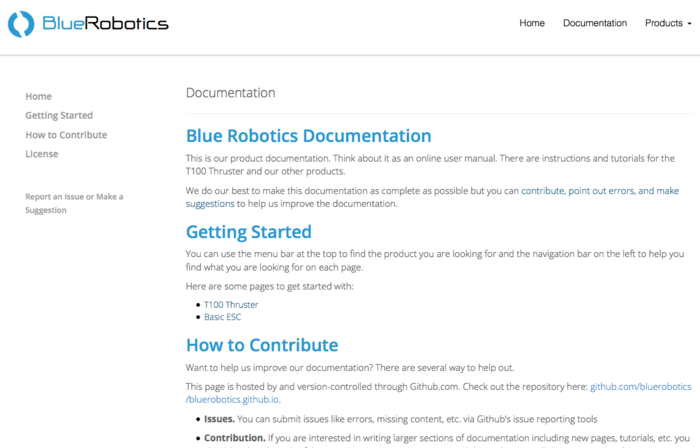 If you are interested in contributing to the documentation, we welcome it and would appreciate it! Just fork the repository on Github, change whatever you’d like, and ask us to pull your changes into the main repository. You can also notify us of errors or suggestions by raising an issue on Github.

In addition to building a lot of thrusters we’ve made a lot of progress on the BlueESC, T200 Thruster, and BlueROV.

We’ve made progress on the BlueESC and we’re hoping to order all of the assembled circuit boards in early January.

We completed testing the BlueESC through it’s full range of operation in air. We’ll be completing testing in water within a week or two. In air, the BlueESC can handle up to 22V and 25A continuous. We expect the current rating to go up quite a bit in water because of the water’s natural heat-sinking ability.

We also received the precision machined aluminum enclosures from our manufacturer in China. They did an excellent job – check out the picture below which shows one BlueESCs mounted to a T100. 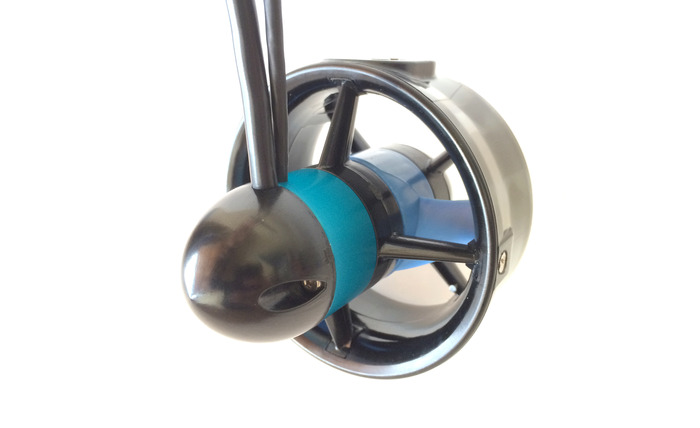 BlueESC mounted to a T100 Thruster.

We also have some updated measurements on the length of the BlueESC. It’s slightly longer than we originally anticipated so that we could add quite a bit of decoupling capacitance. Here’s a dimensional drawing of the T100 Thruster with the BlueESC: 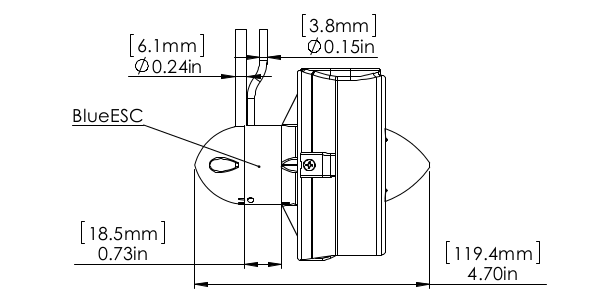 T100 dimensions with the BlueESC installed.

We should be able to start shipping thrusters with the BlueESC in late February. One of our biggest challenges right now is making sure that the onboard software (from the tgy project) is ready for shipment as well. If anyone is interested in BlueESC software development or beta testing, let us know and we may be able to send you a beta test unit.

We finally have a T200 Thruster prototype working! The prototype uses a few 3D printed parts including a new propeller to handle the extra power of the T200.

With the current prototype we’re getting 10 lbs of thrust, which was our goal, however we are trying to push that to around 12 lbs on the final version. The extra few pounds will come from an optimized propeller design, custom arc magnets with more strength than the rectangular ones used in the prototype, and optimized motor windings. 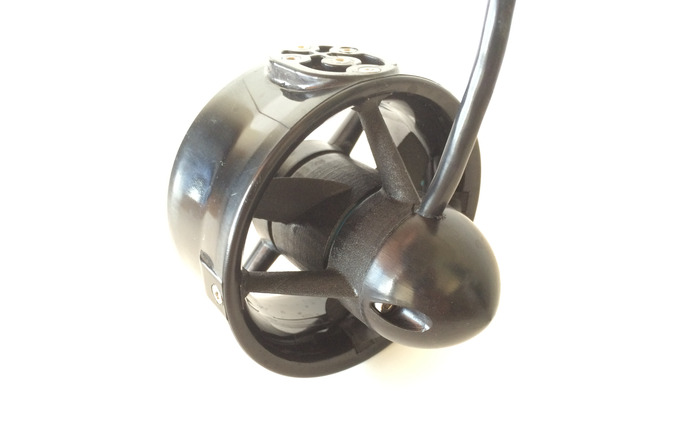 We are also trying a new protective coating method on the magnets and flux ring for the T200 which should offer even better protection and save us a lot of time during manufacturing.

We have full quantities of parts on the way from China and we’ll be ordering the injection molding tooling for a few new parts in January. If things go smoothly we should be able to ship the first T200 orders by late February or March.

We’re going to save most of the BlueROV updates for a future updates since we’ll have lot more pictures and information available in a few weeks.

We spent a lot of time in the last few months refining the design of the central water tight enclosure and now we have full quantities of parts on the way. The tube itself is clear cast acrylic and the end caps are attached by a CNC machined aluminum piece with double O-ring seals. We’ll have pictures as soon as the parts arrive.

The BlueROV itself has grown in size a bit to allow plenty of space for the thrusters, a large central enclosure with room for a lot of electronics, and for extra external space for payloads. It’s taken a lot longer than we originally anticipated, but it’s also grown into a much more robust design. We think you’ll be happy with the results. Unfortunately, it will be a few months before we are able to ship the BlueROV to ensure that we can do plenty of testing.

2014 has been an incredible year for us. It started with a “lightbulb” moment on New Years Day when we came up with the current T100 Thruster design. It’s amazing what can happen in a year.

In April we won the Proto Labs Cool Idea! Award and in August we launched our Kickstarter Campaign. We we’re blown away by your support during the Kickstarter and we’ve been working hard since to get your thrusters to you! We shipped the first thrusters in November, less than a year after we first envisioned the design.

In 2015, we’re hoping to settle into a new building with more space, hire a few employees to help with thruster assembly, and introduce some awesome new products. We’re really looking forward to it and we hope that you will be part of it!

As always, please don’t hesitate to ask us any questions, either on the forums or by email at [email protected]

Support Forums and Announcing the M100!