The Ethernet Switch is a compact switch that integrates perfectly with the Fathom-X Tether Interface Board and the BlueROV2. It improves expandability on the ROV by providing three additional Ethernet ports to connect Ethernet devices such as sonars, IP cameras, and more. 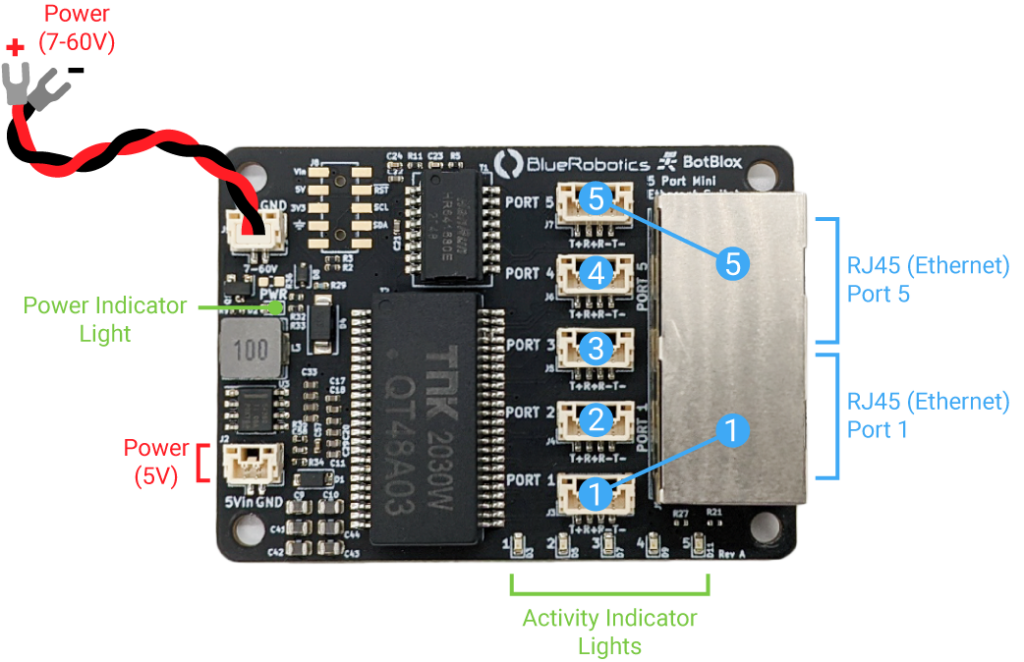 To open the Electronics Enclosure, you will need:

1. Ensure the ROV is completely powered off by disconnecting the battery from the battery power cables.

2. Use the 2.5 mm hex driver to remove the M3x16 screws that mount the Electronics Enclosure to the ROV enclosure cradles. 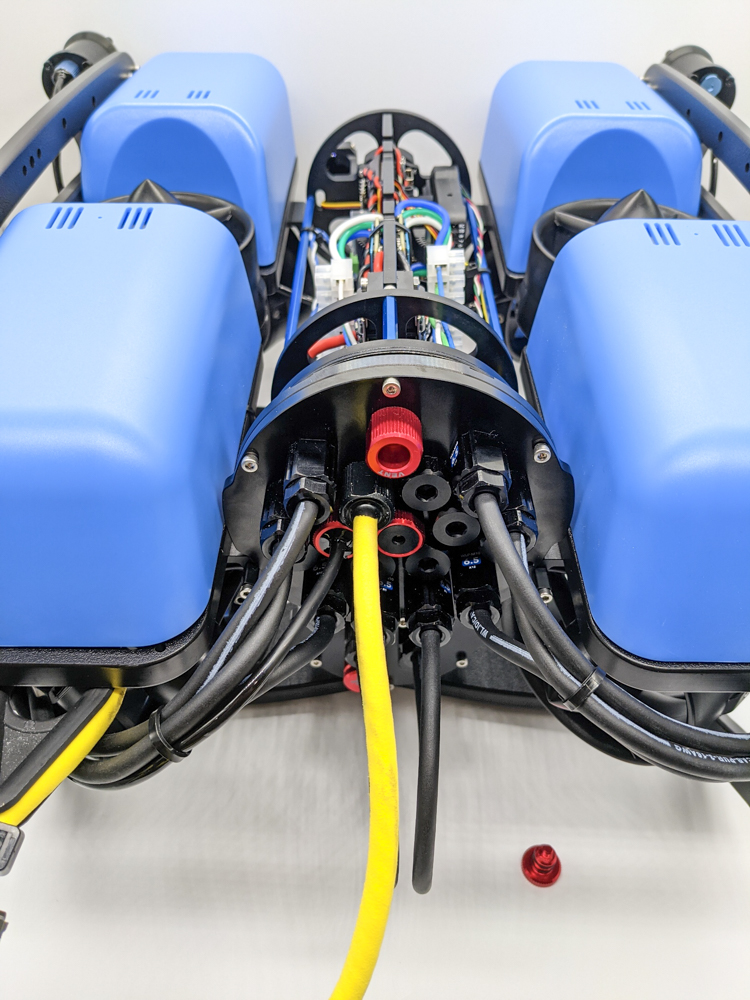 To install the Ethernet Switch in the ROV you will need: 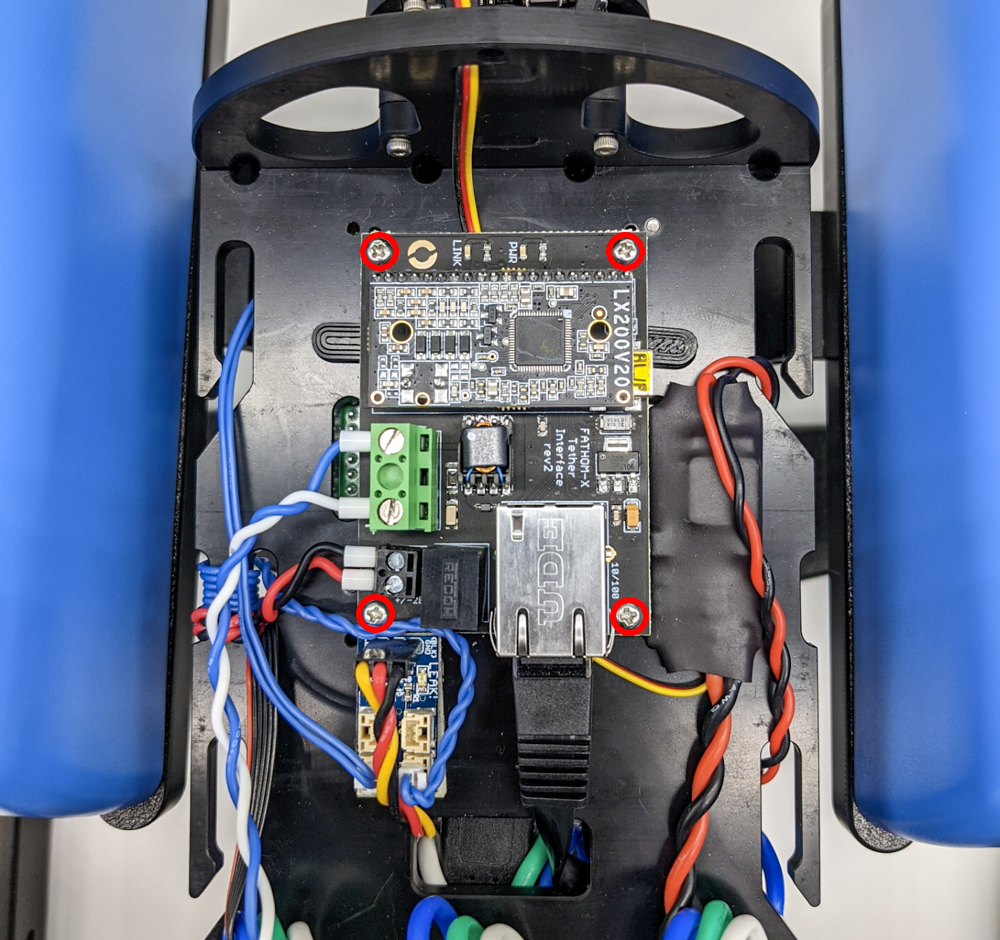 2. Disconnect the Raspberry Pi Ethernet cable from the Fathom-X Tether Interface Board. You can also disconnect the tether extension cable and power cable to give you better access to the bottom of the board. Use the small (~2 mm) flat head screw driver to loosen the terminal screws to allow you to disconnect the cables.

3. Use two of the M3x5 button head mounting screws and 2 mm hex key to install the two 18 mm mounting standoffs on opposite corners of the Fathom-X Tether Interface Board. 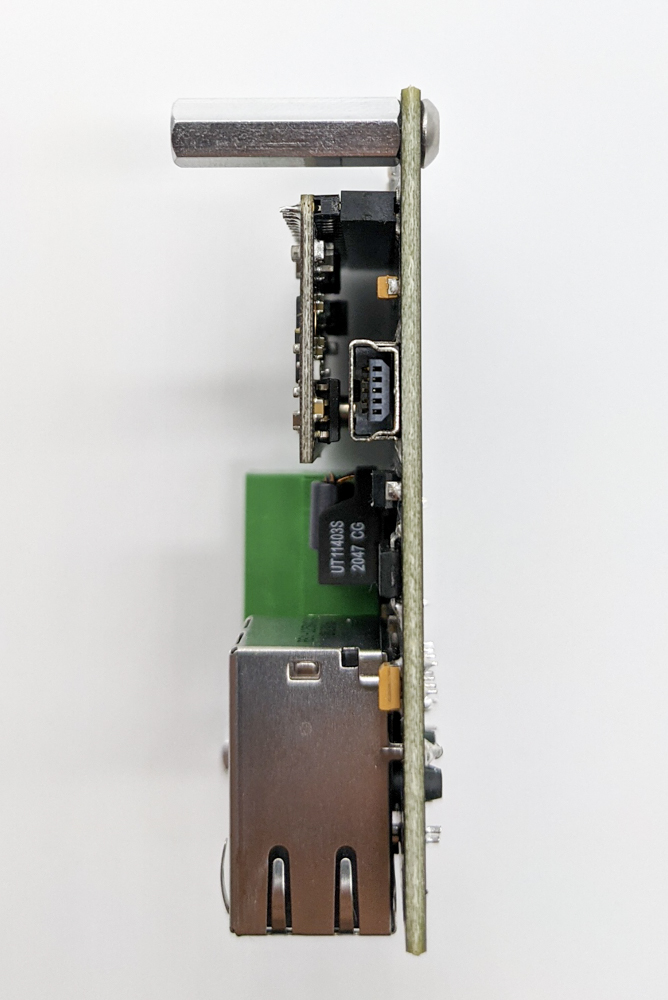 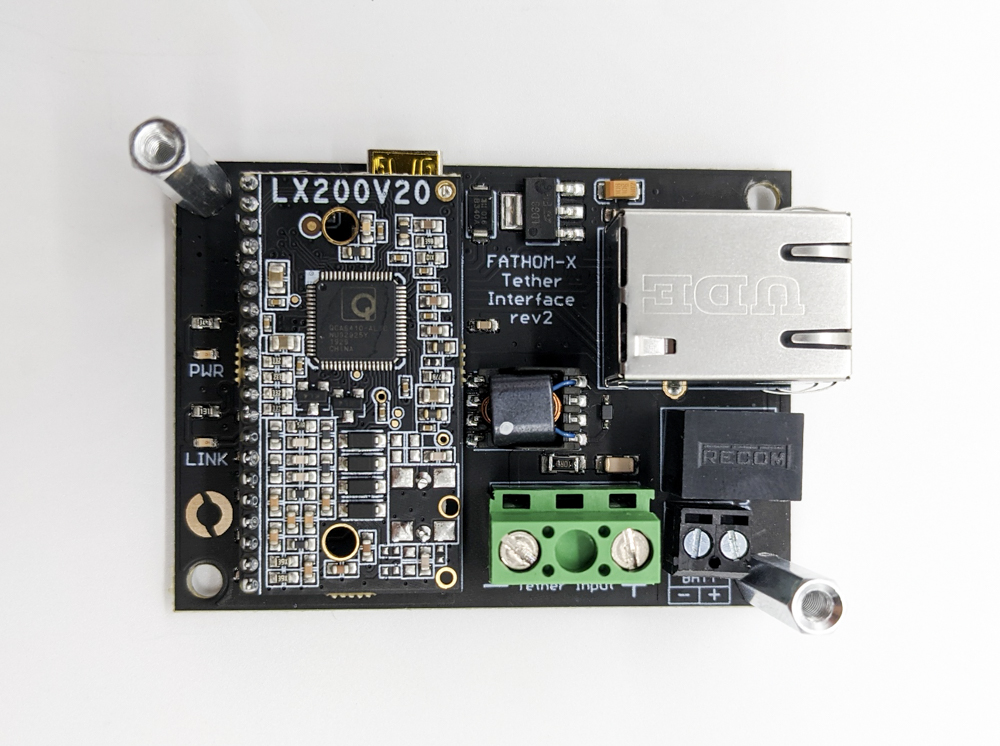 4. Align the plastic spacers that were set aside earlier to the mounting holes on the Fathom-X Tether Interface Board. Use wire cutters or scissors to clip off one end of each spacer so it does not interfere with the button head mounting screw when mounting the board back on the Electronics Tray. 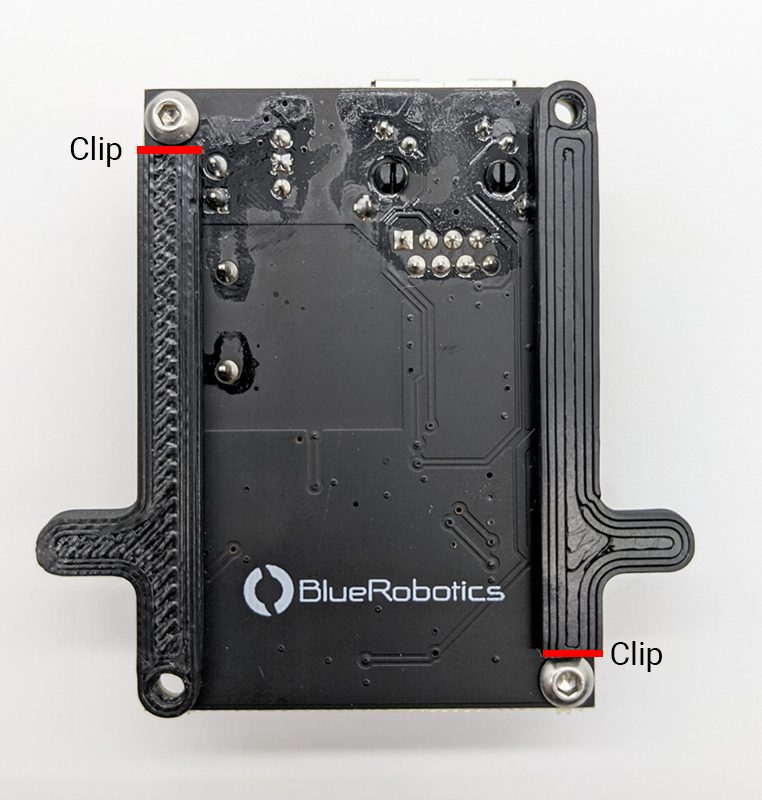 5. Reinstall the Fathom-X Tether Interface Board and plastic spacers to the mounting holes on the Electronics Tray using two of the #3-28 mounting screws you set aside previously. After this step there will be two #3-28 mounting screws left over that will not be used. If the tether extension cable and power cables were disconnected previously, reconnect them to the proper terminals before moving on to the next step. 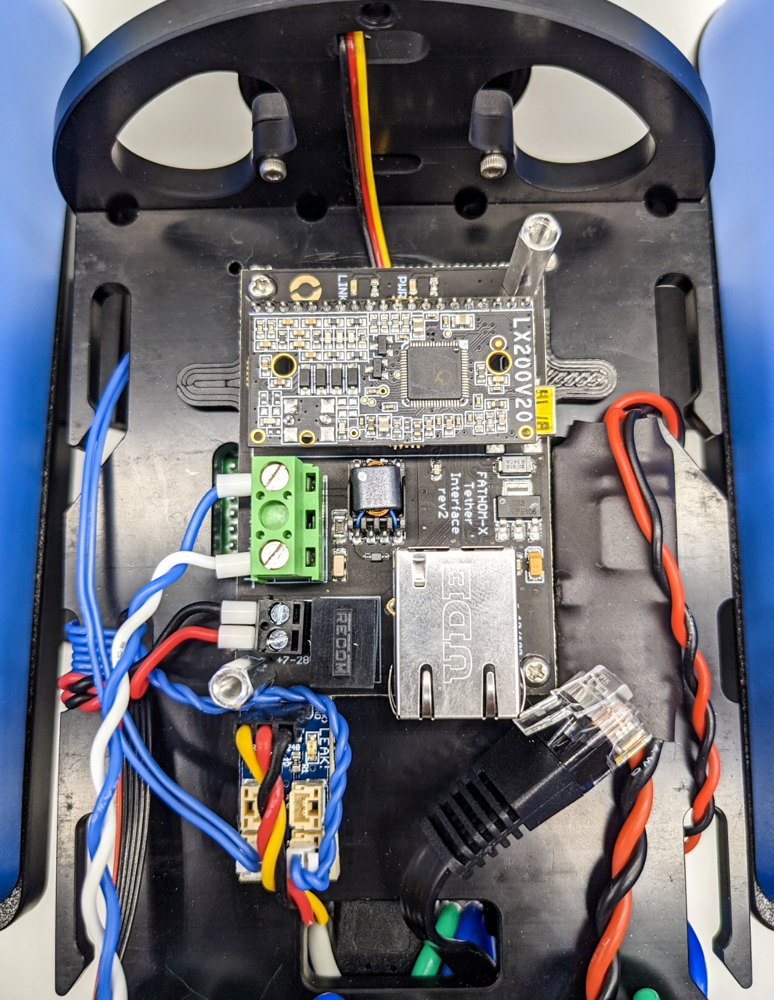 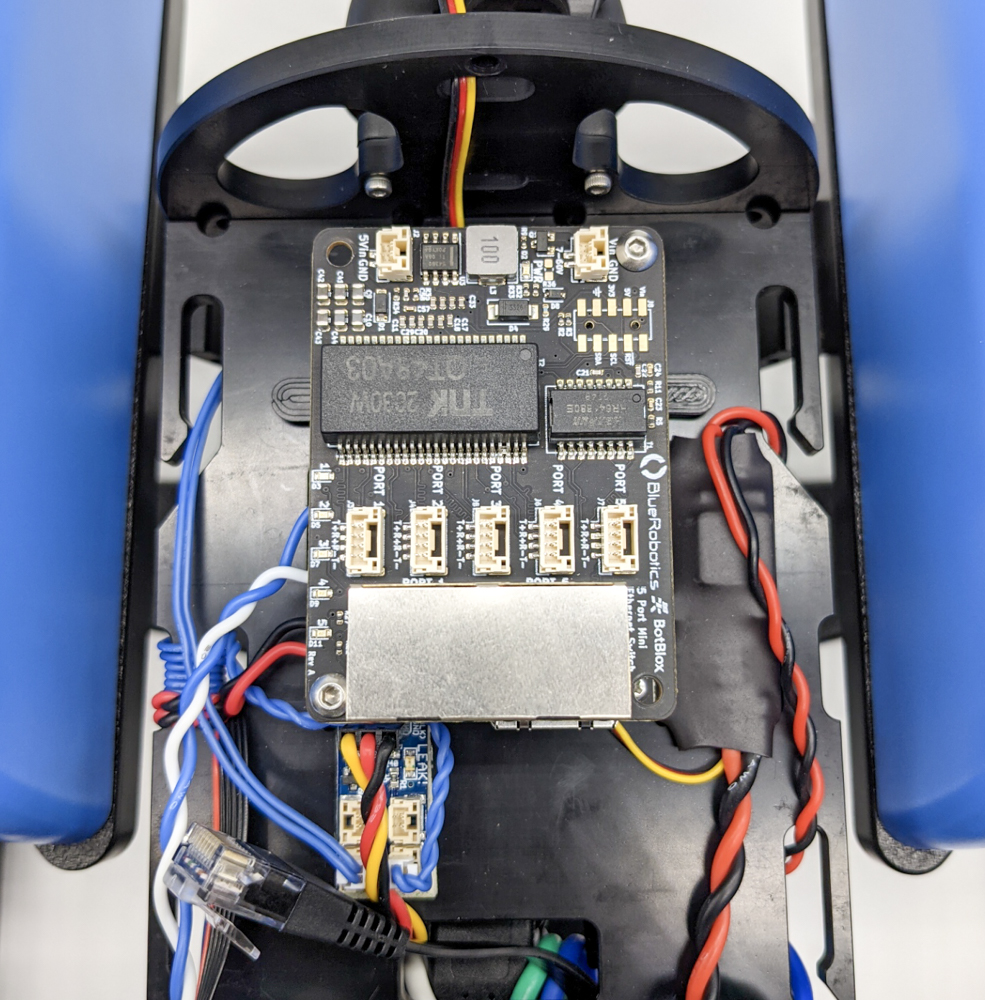 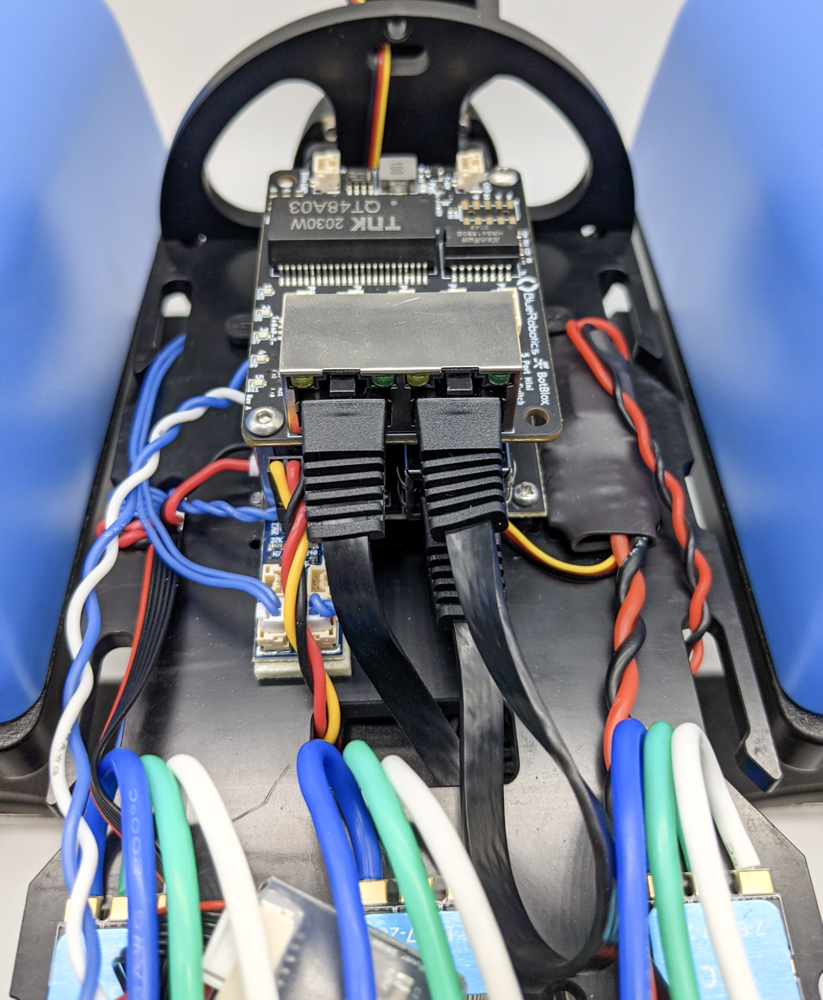 8. Connect the power cable to the 7-60V JST-GH connector in the top left of the Ethernet Switch board. 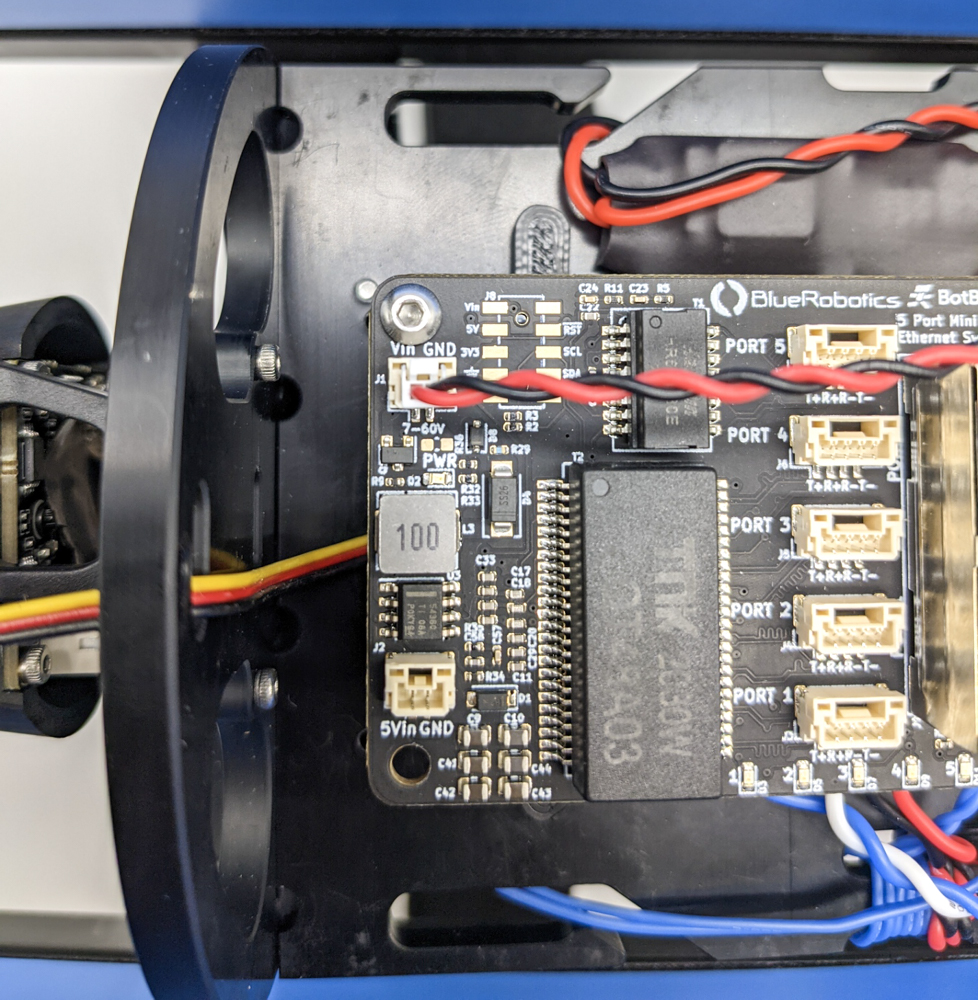 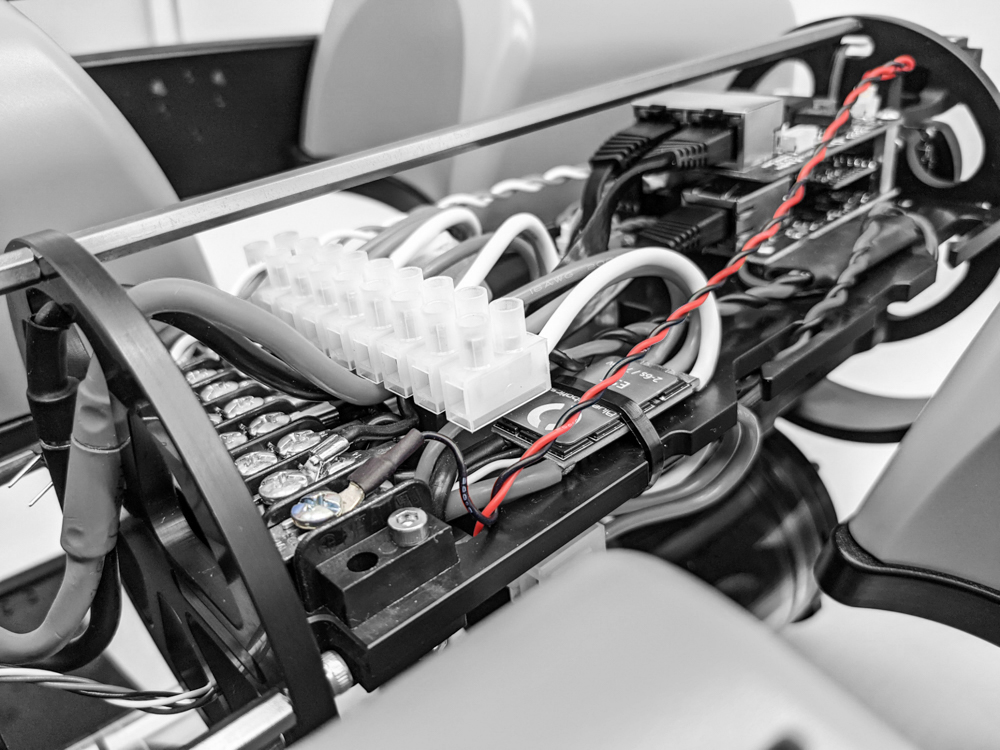 10. Now is a good time to test your connection before connecting any additional devices. Power on the ROV by connecting the battery to the battery power cable. The “PWR” indicator LED on the Ethernet Switch should illuminate and the activity indicator LEDs for ports 1 and 5 should show some activity after a few seconds. Connect the ROV to you topside computer and test if you are able to establish a connection. If everything is working normally, you are now ready to connect other devices to your Ethernet Switch! If there is a problem establishing a connection, proceed to the Troubleshooting section below. 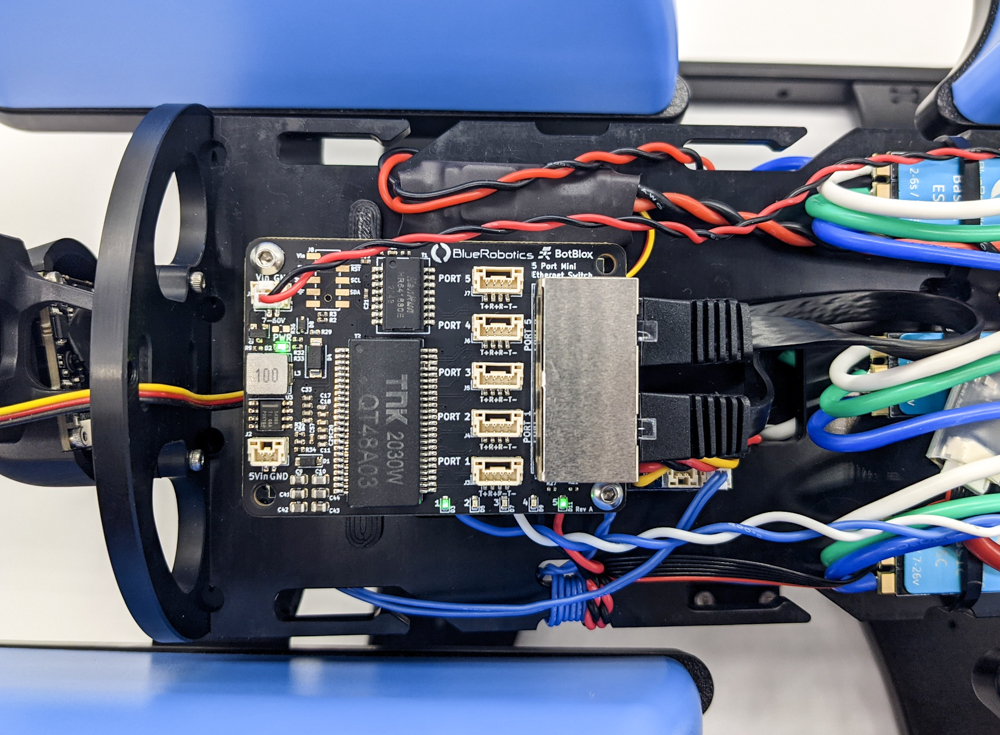 The Ethernet Switch is an unmanaged switch so no additional configuration is required. Just connect a device and the switch will automatically begin forwarding packets.

The Ethernet Switch requires no configuration, but you may need to change your device’s IP or network settings prior to use.

There are a total of 5 ports on the Ethernet Switch. Ports 1 and 5 are each broken out to both a JST-GH connector and an RJ45 jack. When installed in a BlueROV2, the Fathom-X Tether Interface board and Raspberry Pi are connected to ports 1 and 5 via the RJ45 jacks. This leaves ports 2, 3, and 4 open to connect other Ethernet devices. 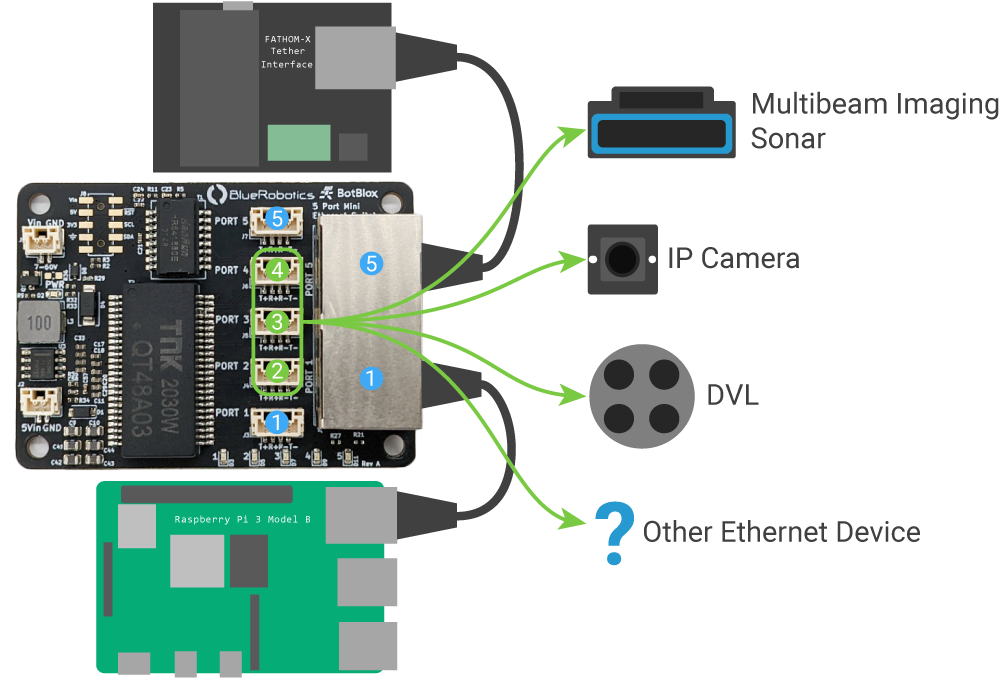 Only one device should be connected to either the JST-GH connector or the RJ45 jack on ports 1 and 5. Connecting multiple devices to the same port will lead to communication problems.

An RJ45 to JST-GH adapter board is included in the Ethernet Switch kit. 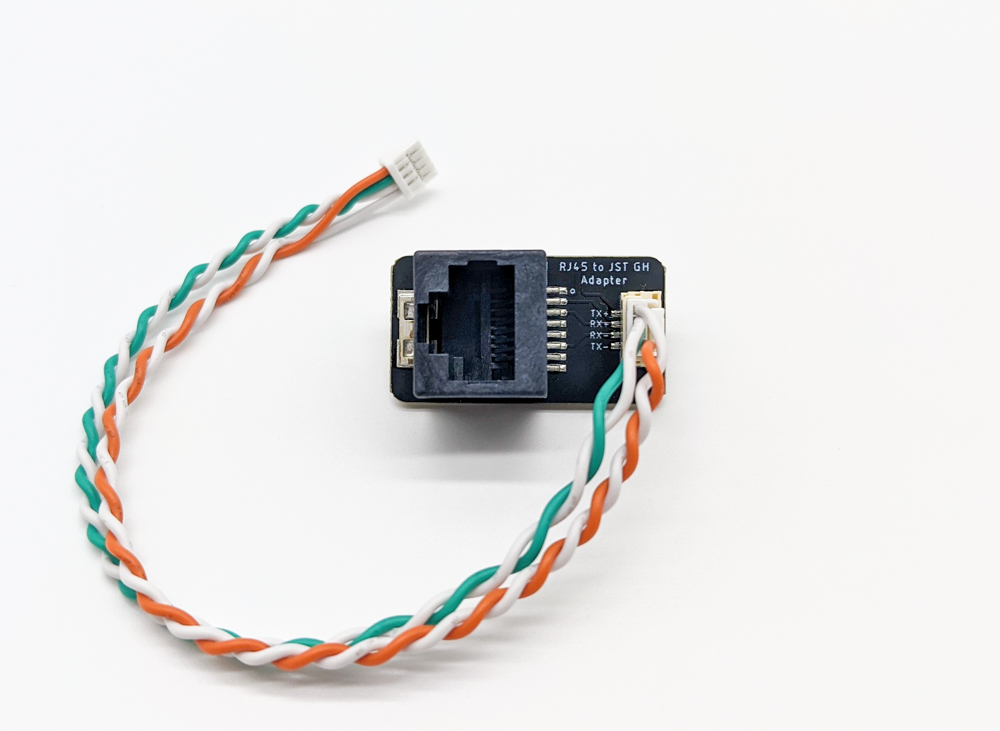 This adapter makes it easy to connect your Ethernet devices for initial testing. Additional RJ45 to JST-GH Adapter Boards can be purchased separately here. 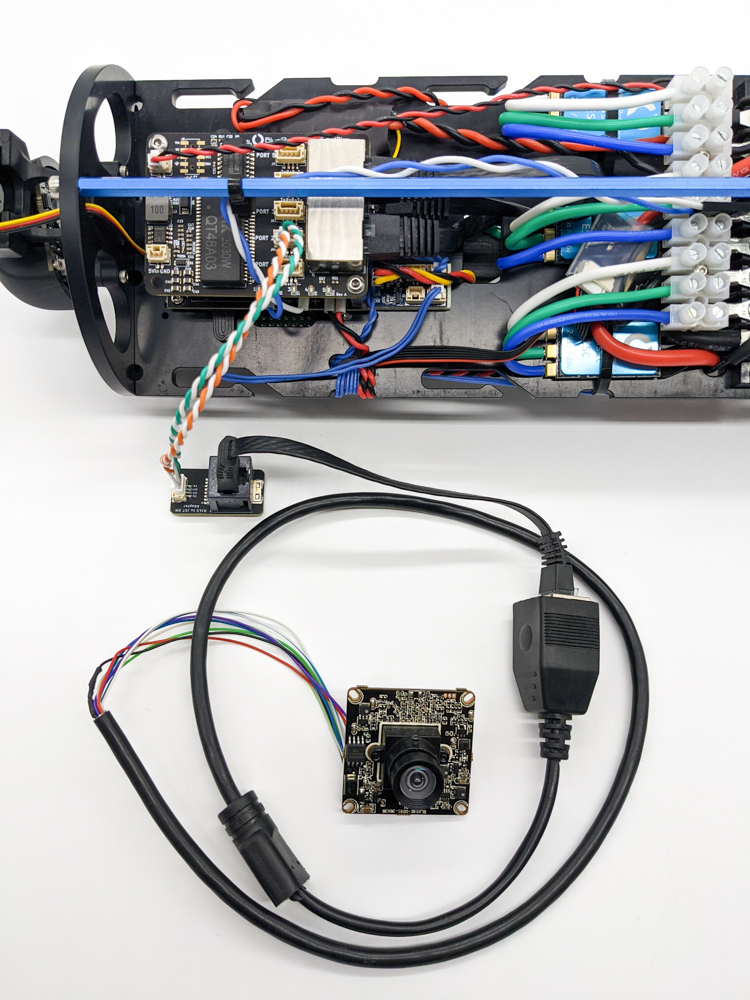 Testing an IP camera using the RJ45 to JST-GH adapter.

For long term integration or integrations where the device cable will be routed through a cable penetrator hole, we recommend solder splicing one of the included JST-GH to JST-GH twisted pair cables to your device. Clip one end of a JST-GH to JST-GH twisted pair cable and solder splice it to the device cable following the Blue Robotics Connector Standard for Ethernet connections. 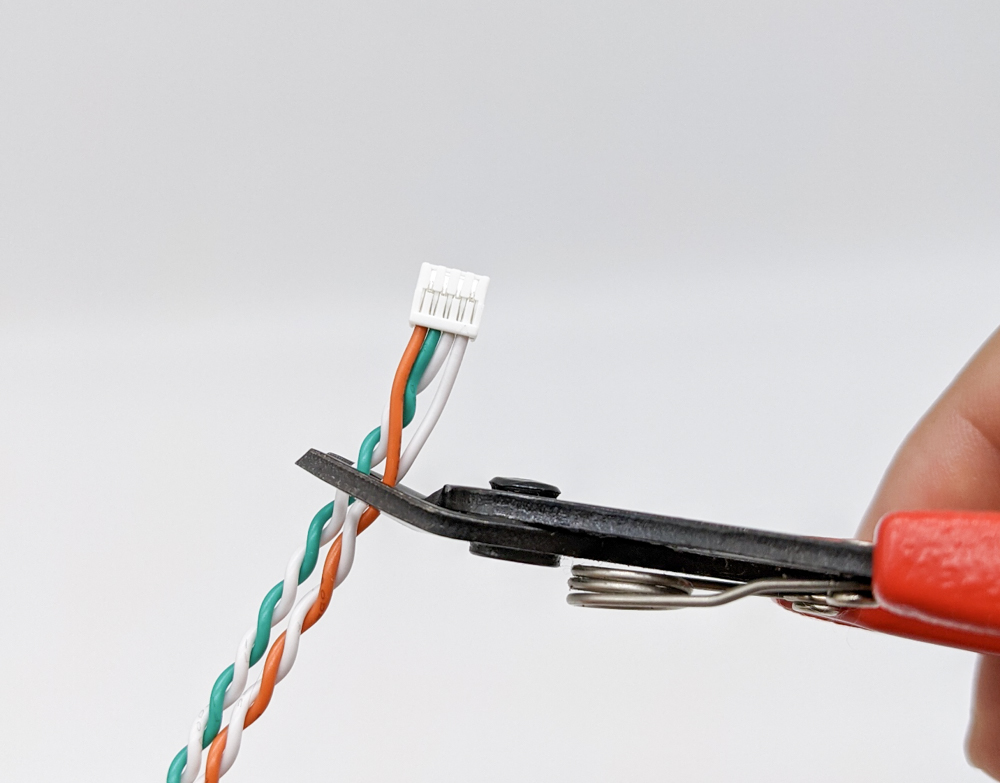 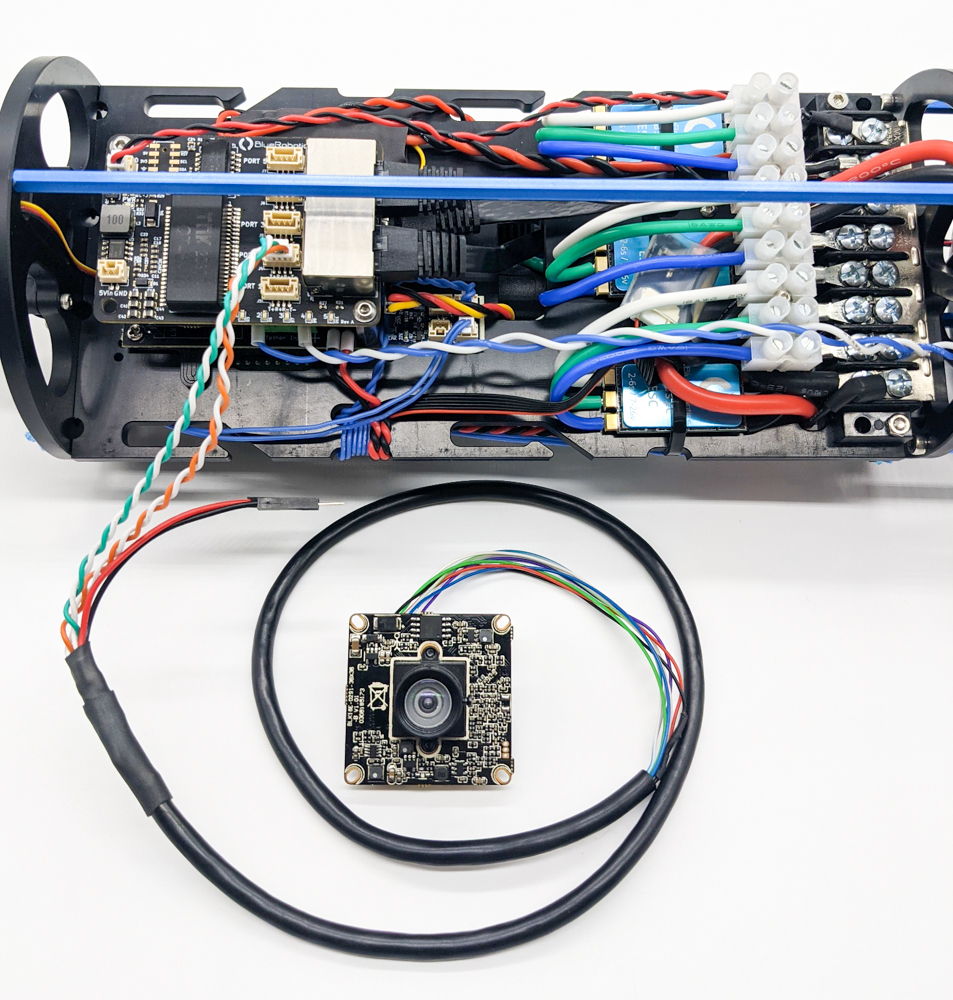 IP camera cable spliced with a JST-GH twisted pair cable and connected to the Ethernet Switch.

Cannot connect to a device

We’re always trying to make our documentation, instructions, and user experience better. If you’d like to leave feedback about how we can make this guide better, let us know here.