Today we have a very special new product announcement. We’re partnering with Water Linked, a Norwegian company, and announcing the release of a revolutionarily low-cost Underwater GPS system. This new product, the Water Linked Underwater GPS Explorer Kit combines a traditional GPS receiver and compass with an acoustic positioning system to provide positioning information underwater. We think this technology will be revolutionary to how we use ROVs.

We’re partnering with Water Linked as their first and only distributor for this system, and it will also be supported out of the box in ArduSub and the BlueROV2.

The Water Linked positioning uses something called Short Baseline (SBL) acoustic positioning. Basically, the ROV has locator beacon that sends out an acoustic pulse. Near the surface, there are four receiver hydrophones lowered into the water. The hydrophones listen for the pulse from the locator beacon and use difference in the time-of-arrival to each receiver to triangulate the ROV’s position. SBL systems, compared to the USBL systems more often used on ROVs, have the advantage of working well in shallow water and noisy acoustic environments, such as in a fish cage. 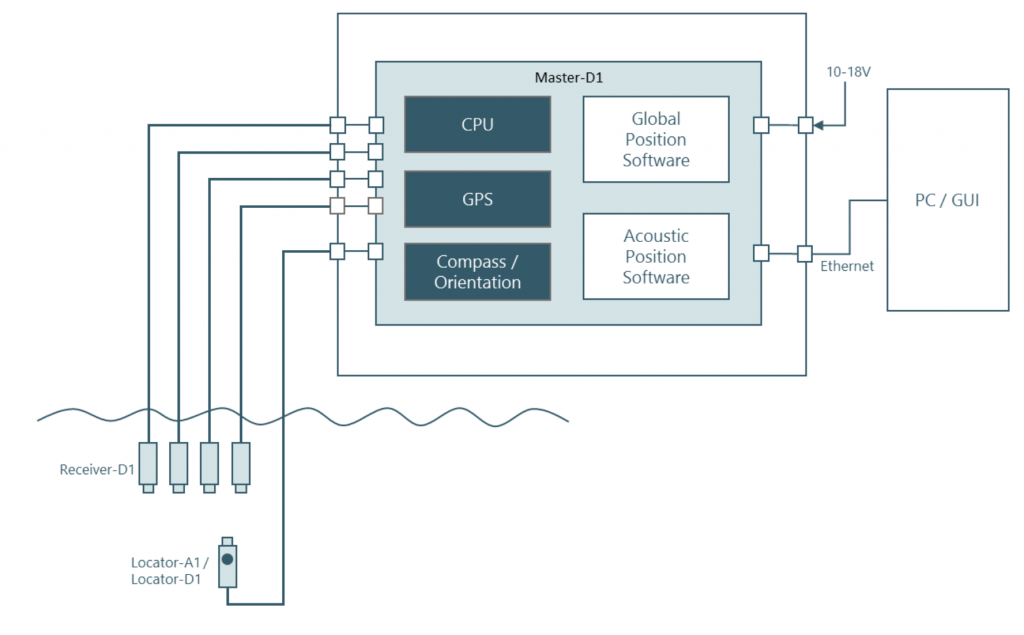 The addition of position information when operating an ROV or other marine robotic vehicle is a big change. It means that photos from inspections can be geotagged, targets with known coordinates can be found easily, and ROV can even be programmed to do autonomous actions, such as holding position in a current or following a set of GPS waypoints.

Today were launching the Underwater GPS system in a kit that includes all of the required hardware. The software is in a functional state already, but will be improved quite a bit over the next few months. That includes the addition of a well-documented API, performance improvements, and added features. The system includes everything you need to get started – check out the individual product pages for more details, datasheets, and info.

Orders can be placed today but please note that the first systems won’t ship until about June 15th of this year.

The components of this system will also be available separately as spares or for integration directly into your project. We aren’t selling these items separately yet, but they’ll be available once the product is shipping.

The guys from Water Linked visited us last month to integrate the Underwater GPS system with the BlueROV2 and show exactly how well it works. We put together three fantastic videos demonstrating the system as we started to test it. These video demonstrate just the early capabilities and performance of the system.

BlueROV2 Position Hold in a Tank with Underwater GPS Positioning:

BlueROV2 Manually Piloted to a Wreck at a Known GPS Coordinate:

We’re announcing this in conjunction with the Ocean Business 2017 event in Southampton, UK. If you happen to be there this week, please come visit us at Stand V42!