Today we’d like to share something that we’ve been working on for quite a while. If you stay on top of our forums or Github page, you may have already seen a bit about it.

This new project is called ArduSub.

ArduSub, we hope, will become the open-source future of subsea vehicles. It encompasses the software and hardware that make up the brain of an ROV or AUV, providing everything needed to control the vehicle, communicate with the surface, and perform sophisticated subsea missions.

At Blue Robotics, we’ve always embraced open-source technology and this project is no different. ArduSub is based on the open-source ArduPilot project, one of the world’s most capable and successful autopilots for drone airplanes, helicopters, and ground vehicles. ArduSub takes the ArduPilot project to a new frontier with subsea capabilities targeted towards ROVs and AUVs.

What does that mean for future ArduSub users? It means that this project isn’t started from scratch – it’s born from years of previous development work, hundreds of contributors, thousands of hours of testing, and several generations of hardware. That provides ArduSub with a rapid path to maturity and already-built-in capabilities and features that surpass those of many commercial ROVs. 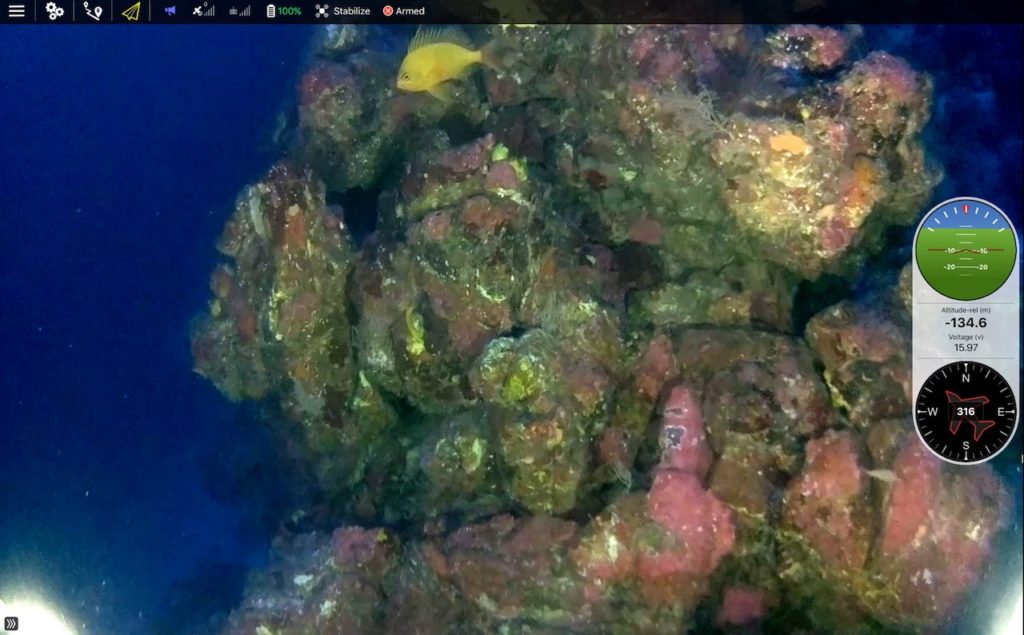 Deep-dive test at 135m with an ArduSub-powered ROV.

It also means options. ArduSub is compatible with ten or more different hardware options, multiple topside user interfaces on every operating system, a wide variety of sensors and actuators, and a host of tools such as DroneKit, mavros, and more.

All of this is thanks to the open-source community that has been working on ArduPilot for many years. Blue Robotics is committed to supporting the continued work of that community and to contribute back to it. We have proudly joined the DroneCode Foundation, which manages the ArduPilot codebase, and hope to support this great organization for many years.

Where are we at right now? ArduSub is currently capable of controlling several different ROV frame styles and has support for gamepad/joystick use through QGroundControl, depth/heading hold, lights, and video streaming to QGC. We’ve done lots of testing including ROV dives down to 135 meter depth.

What’s next? With the help of several contributors and a number of beta testers, we are making steady progress towards the first official release of ArduSub. We’re working on lots of improvements to make it easier to set up and easier to use. ArduSub is still under heavy development and there are new changes happening often. Please follow along and let us know if you’d like to join in.